DMX Addiction Story: How It Started & Did He Overdose?

DMX Overdose, His Addiction Story and His Legacy

On April 2, iconic Hip-Hop star DMX was rushed to the hospital after suffering an overdose-induced heart attack at his home in White Plains. After the troubling news broke, friends, family, and countless fans gathered outside the hospital, paying tribute to the legendary rapper by playing his music and even holding up their arms in the shape of an X.

Unfortunately, their prayers for the rapper’s recovery went unanswered, as the three-time Grammy-nominated artist succumbed to his condition on April 9. While the details of his death and overdose are still unconfirmed, many of his fans are left wondering the same thing: did DMX die from crack?

It’s no secret that DMX had a jaded past with substance abuse. In fact, the rapper was always open and honest about his struggles with addiction to illicit drugs like crack cocaine. Sadly, despite his efforts to get clean and sober throughout the years, DMX’s addiction to crack cocaine likely contributed to his untimely death.

The American rapper’s death comes as overdose deaths hit an all-time high throughout the United States. The massive spike in overdose deaths is largely contributed to the effects of the COVID-19 global pandemic.

DMX At A Concert Before His Heart Attack

DMX Cause of Death – What Did DMX Overdose On?

DMX — born Earl Simmons — was reported to be in critical condition at White Plains Hospital in New York after enduring a catastrophic heart attack late Friday night of April 2. Due to the severity of his condition, DMX was placed on life support, where he remained in a vegetative state, according to his manager, Nakia Walker. Following his admittance to White Plains Hospital, Walker released a statement saying:

Despite the best efforts of the medical team at White Plains Hospital, the American Music Award winner passed away a week later, on April 9. While DMX’s cause of death is ruled a massive heart attack, there is much speculation surrounding how the heart attack was induced. Many reports have stated that the hip-hop artist’s heart attack was a result of excessive drug abuse. Although it hasn’t been ruled out, a potential overdose has not been officially confirmed.

DMX’s family made a statement with the media to share the devastating news of his untimely death:

We are deeply saddened to announce today that our loved one, DMX, birth name of Earl Simmons, passed away at 50 years old at White Plains Hospital with his family by his side after being placed on life support for the past few days. Earl was a warrior who fought till the very end. He loved his family with all of his heart, and we cherish the times we spent with him. Earl’s music inspired countless fans across the world and his iconic legacy will live on forever.

We appreciate all of the love and support during this incredibly difficult time. Please respect our privacy as we grieve the loss of our brother, father, uncle, and the man the world knew as DMX.

Before getting his big break as a rap star, DMX made quite the name for himself as a battle rapper back in the early 1990s. In 1997, DMX’s career reached a new level when he was featured in LL Cool J’s song “4,3,2,1” alongside Method Man, Redman, Master P, and Canibus. That same year, DMX also had a feature in Mase’s “24 Hrs. to Live” and the Lox’s “Money, Power, Respect.”

In short order, these high-profile appearances enabled DMX to release his debut major-label single, “Get at Me Dog” with Def Jam Recordings, and later, his debut album, “It’s Dark and Hell is Hot.” Released in May 1998, this album reached number one on the Billboard 200 chart in the United States, selling over five million copies.

With incredible success and nearly instant fame, DMX released yet another album that same year — making him the second rapper (next to Tupac Shakur) in history to release two albums in the same year. His second album, “Flesh of My Flesh, Blood of My Blood,” also hit number one on the Billboard 200 and remained there for three weeks.

Eventually, the album was Platinum certified four times. But his fame didn’t stop there. In 1999, DMX released his third and one of his best-selling albums, “And Then There Was X.” Like his past two albums,” And Then There Was X” debuted at number one on the Billboard 200 with the notorious single, “Party Up,” which became his first Top Ten hit on the R&B charts. 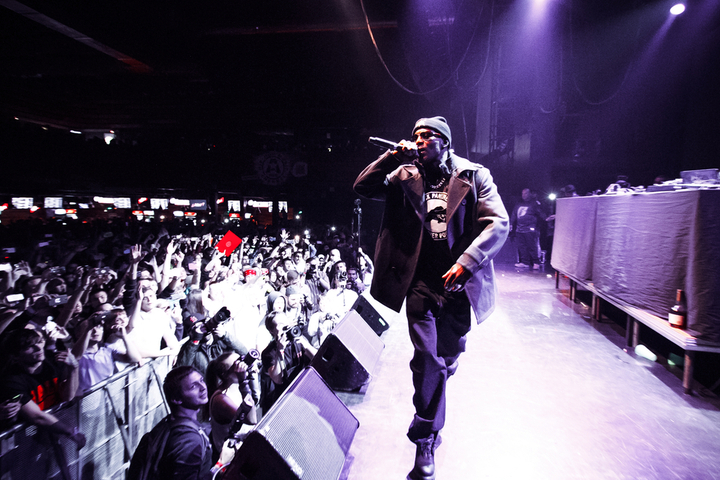 In 2001, DMX released his fourth album, “The Great Depression,” which also made its debut on the top of the Billboard 200. Unlike his previous albums, “The Great Depression” was only triple Platinum certified. However, upon releasing his fifth album, “Grand Champ” in 2003, DMX made a startling announcement that he would be soon retiring and “Grand Champ” would be his last album.

Although his fans were shocked and saddened by the abrupt news, “Grand Champ” still lived up to its predecessors and hit number one on the Billboard 200. Surprising many of his fans, DMX signed with Columbia Records in January of 2006 and released “Year of the Dog…Again.” After this revelation, DMX put his plans for retirement on hold and spent the next couple of years releasing new albums and some of his greatest hits.

DMX’s career as a rapper was truly exceptional, as he sold millions of records and was nominated for three Grammy Awards. In fact, as of June 2014, DMX became the fifth best-selling rap and hip-hop artist of the Nielsen Soundscan era in the United States, with over 23.3 million albums sold. Additionally, he was one of the first musicians whose first five albums reached No. 1 on the Billboard chart — a noteworthy and remarkable record to be remembered for.

Before DMX made it big in the music industry, Earl Simmons was just a 14-year-old boy with big dreams and great talent. But, before he was able to establish himself in the world of hip-hop, Simmons was quickly introduced to the dark side of the industry that would change his life forever.

In a November 2020 podcast interview with Talib Kweli, Simmons opened up about his past struggles with substance abuse and where it derived from. At just 14 years of age, Simmons was newly making his way into the music scene in the mid-’80s when he met Ready Ron, a local rapper, and Simmons’ soon-to-be mentor. Sadly, it was because of Ready Ron that Simmons was introduced to the dangerous world of addiction, as the rising hip-hop star’s mentor tricked him into smoking crack by giving him a laced blunt. In the interview, Simmons explains:

Soon after that fateful experience, Simmons graduated to the notorious DMX but as his career took off, so did his experimentation with illicit drugs. Unfortunately, DMX also had many run-ins with the law and was charged multiple times for drug possession.

DMX even racked up plenty of DUIs and was consistently cited for driving without a license, driving with a suspended license, and even reckless driving. As the years continued, his recklessness never took a back seat to his soaring career. In fact, between 2000 and 2015, DMX was arrested over 20 times for various charges like possession, parole violation, theft, animal cruelty, and outstanding child support payments. Like many struggling with addiction, DMX suffered his fair share of moments of recovery and relapses. In 2011, the hip-hop icon had a stint of sobriety and accredited his children for this motivation to stay sober.

Unfortunately, his sobriety didn’t last very long, and his battle with substance abuse persisted. In 2016, DMX’s addiction to crack cocaine and other illicit drugs took a turn for the worse when he was found unconscious from an overdose outside a hotel in New York. When police arrived on the scene, DMX was not breathing, and medics had to administer Narcan — an emergency medication used to treat opioid overdoses. Luckily, DMX became semiconscious and was rushed to the hospital to receive treatment.

Later in 2018, the rapper was on trial for 14 counts of tax fraud and relapsed on cocaine and Oxycodone after leaving a court-ordered addiction treatment program. Due to this, the judge ordered DMX to be remanded to jail pending his trial. After pleading guilty on all counts, DMX was sentenced to one year in prison and three years of supervised release.

The rapper was ordered to pay $2.3 million in restitution to the government and enroll in another outpatient addiction treatment program upon his release.

In October of 2019, the singer and songwriter took to social media to announce the cancellation of his upcoming concerts to return to rehab once again. The Instagram post read:

In his ongoing commitment to putting family and sobriety first, DMX has checked himself into a rehab facility. He apologies for his canceled shows and thanks to his fans for their continued support.

The news of his return to rehab came a few months after his release from prison in January 2019. After this stay in rehab, it seemed like DMX was finally on the right path to sobriety and working hard to be a better father, partner, and artist. Unfortunately, his long-standing battle with addiction came to a tragic end this year.

His Early Years Before Fame

Although DMX was greeted with fame and fortune in his adulthood, his early years were filled with poverty and trauma. Earl Simmons was born in Mount Vernon, New York in 1970 — although, some accounts say he was born in Baltimore, MD — to Arnett Simmons and Joe Barker.

Growing up, Simmons rarely saw his father, and his mother struggled to raise him and his half-sister, Bonita, in Yonkers. In his 2002 memoir, “E.A.R.L.: The Autobiography of DMX”, Simmons recalled that there was always little food at home and he was often abused by his mother and her various boyfriends.

As a teenager, Simmons spent many years bouncing around group homes and juvenile detention facilities, where he first dabbled in crimes like car theft and robbery. Simmons took to beatboxing and hip-hop music as an outlet and escape from his troubled reality, and found a hidden talent in rapping.

It wasn’t until the 1980s that Simmons started performing as a beatboxer with Ready Ron that he decided to trade in the street life for something more. While DMX had a successful career as a hip-hop artist and rapper, his unresolved and lingering childhood trauma had a significant impact on his well-being. Arguably, this could be the very reason his drug use got out of hand for all those years.

In the conclusion of the Talib Kweli interview, DMX left us with this:

You never know when the things you stored away are going to come out and just fall all over the place…Let me open this door and start dealing with this sh** right now before it comes out at the wrong time and I just have a meltdown…that’s what’s helps with addiction and sobriety. 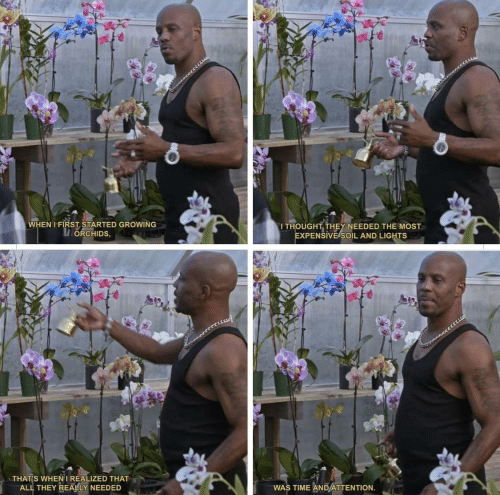 “When I First Started Growing Orchids, I Thought They Needed The Most Expensive Soil And Lights. That’s When I Realized That All They Needed Wes Time And Attention”

If you or someone you know is struggling with addiction, please know that you are not alone — help is always out there. When you are ready to take the steps to recovery, call the professionals at Find Addiction Rehabs. We’re here to guide you toward the path of recovery so that you can look forward to a happy, healthy, and sober future.